You are here: Home > Things To Do > Chavenage House 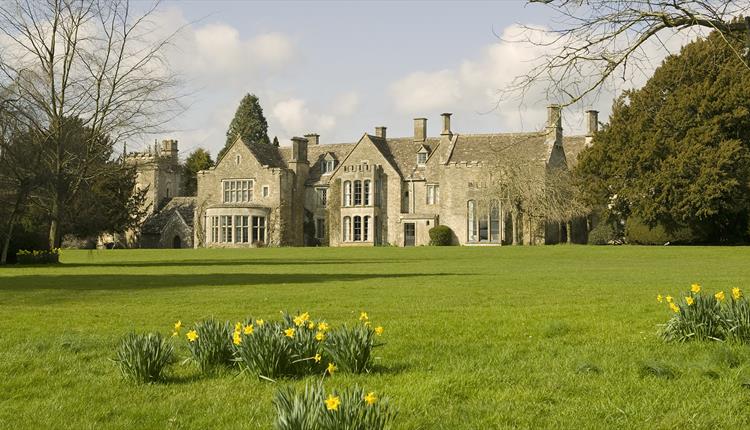 Seen through the gatepiers which guard the entrance to its forecourt, Chavenage, with its mildly asymmetrical E-plan, golden stone walls and lichened grey roofs, is the perfect vision of the Cotswold Manor House.  In the middle ages, the estate was part of the manor of Horsley, which belonged to Bruton Abbey in Somerset.  The estate was presumably run from Horsley, where the abbey had a little dependent monastery, but a manor house was mentioned at Chavenage in 1464, and it seems likely that the earliest parts of the present house date from monastic times, although it is hard to point to any medieval work that is certainly in its original position.

After the Dissolution, like so many other Gloucestershire estates, the manor was granted first to Thomas Seymour, Lord Seymour of Sudeley, who was attainted in 1549. The property then reverted to the Crown, being granted anew in 1553 to Sir Walter Denys of Dyrham, whose son sold the estate to Edward Stephens of Standish in 1562 and 1564; his descendants remained the owners until the late 19th century.  It is interesting to note, however, that until the early 18th century, Eastington House was regarded as the family's main seat, and Chavenage was probably used mainly as a dower house or by eldest sons before they inherited. It was described as a ‘great farm house’ in 1654, when Nathaniel Stephens settled it on his daughter-in-law as her jointure.

The history of the house is hard to unravel because of the extent of later antiquarian alterations, but Edward Stephens probably remodelled and extended it by the addition of the wings and the central porch, which bears his initials and the date 1576. The window of the porch room is a reused early 15th century piece, and the porch leads into a screens passage with a stone newel stair at the far end, which could be a surviving part of the late medieval house. The two-storey hall opening off the screens passage is lit by tall mullioned and transomed windows that have been inserted into an earlier wall. The screen, which supports a gallery with an 18th century chamber organ, is not original, but is an opened-up timber partition wall, and the initials 'E.S.' and much of the decorative work which adorn it were added in the 19th century. The studwork of a shallow plaster barrel vault remains above the present gallery ceiling and may represent the form of the 16th century hall roof, now replaced by a flat ceiling.

After Edward Stephens's death in 1587, the estate passed to his son Richard (d.1599), whose widow Anne retained the manor house until her death. Their son Nathaniel may have been responsible for the panelling of the parlour (now known as the Oak Room), as it is dated 1627, but this room may also have been put together from disparate elements at a later date. In particular, the remarkable fireplace, which seems to be mid 16th century, and which is wholly Gothic except for two Renaissance brackets, must surely be an import. If it is not in situ, the panelling could perhaps have been brought from Eastington when it was abandoned by the family in the 18th century.

Nathaniel Stephens was succeeded in 1660 by his son Richard, and either father or son rebuilt the east end of the south wing, as the fenestration suggests a mid to late 17th-century date.   This range contains on the first floor the two bedrooms known as Cromwell's and Ireton's rooms, both of which are hung with Flemish tapestries of c.1640, although the tapestries in the Ireton room are badly cut up and were probably installed here later.  In the early 19th century the house contained three bedrooms hung with tapestries, but the rooms were not then named.

It was the next owner, Nathaniel Stephens (d.1732) who abandoned Eastington and made Chavenage his principal seat, and he was succeeded by his four sons, Richard (d.1770), Nathaniel (d.1776), the Rev. Robert (d.1777) and Henry (d.1795), in turn.  Nothing of their contributions to the house can now be identified with certainty except for a rococo chimneypiece in the library, the staircase leading to the Cromwell and Ireton rooms, and a crumbling folly in the woods, which was perhaps designed by Thomas Wright for Richard Stephens.  Henry's widow Anne held the estate until her death in 1801, when it passed to a cousin, Henry Willis, who took the surname Stephens.  He seems to have suffered from a persecution mania, being convinced that his relatives were trying to poison him, and in 1814 he made his property over to trustees and fled the country, going to live in a remote Dominican convent in the Canary Islands where he hoped he might be safe.  He did not, in fact, become a friar, but returned to London by 1816 and died in Paris in 1821.   It was probably Willis Stephens who began the antiquarian alterations to the house by building the tower of the chapel on the lawn at the rear, which is first recorded in 1803, and which contains windows and statuary of the 14th to 17th centuries. The original nave, which may have been earlier, was replaced in the late 19th century.

From 1814 until 1840 the Chavenage estate was administered by trustees, and from 1817 it was leased to John Delafield Phelps, a barrister who had inherited wealth from his father’s cloth manufacturing interests, and who formed the first known major library of Gloucestershire books and pamphlets.   He was certainly responsible for getting the chapel licensed for divine worship, and operated it as a chapel of ease for Horsley parish, employing a succession of curates.   It may also have been he who created the billiard room and the prominent bay windows on the south front, as well as lowering the sills of the Great Hall windows. These alterations were remarkably sensitive to the atmosphere of the house. The billiard room, although unmistakably a Georgian apartment, is decorated in a neo-Jacobean manner, with a chimneypiece similar to the one in the hall, and an elaborate dado with papier-maché decoration of approximately Jacobean flavour. On the exterior, the alterations are more conventionally Gothick, but most felicitious, giving the south front considerable variety and interest [MAJ 95D].  A print of 1817 in the house appears to show the billiard room as having two tiny oriels as well as its bay, so the present arrangement was perhaps created later, presumably for Phelps.  In 1969 a series of drawings of 1826-28 by Sir Jeffry Wyatville for the decoration of the state rooms at Windsor Castle were found in the house and sold to the Royal Archives.  It is hard to imagine how they could have reached Chavenage, but they do suggest that someone with an interest in interior decoration was in the house at the time, and this must have been Phelps.

From 1848 the estate was held by Henry Townshend Stephens, who  unexpectedly inherited the Townshends’ Irish estates in 1845 and went to live at Castle Townsend, again leasing Chavenage, and later mortgaging it to R.S. Holford, millionaire owner of the adjoining Westonbirt estate.  Holford foreclosed in 1891, and the house was sold to Colonel W.W. Hoole as a home for his son George Hoole-Lowsley-Williams (d.1937).   George, who was then a Cambridge undergraduate, later came to live at Chavenage, and in 1904-5 employed J.T. Micklethwaite, a former pupil of G.G. Scott, to build a new west wing in a pared-down Arts & Crafts style.   This contains a large ballroom with a sprung floor, and additional service accommodation, some of which has now been converted to a family sitting room.  Externally, much of the range has a visually unsatisfactory flat roof; internally, the client's insistence on fireproof construction produced uncommonly spartan finishing. After the death of George Hoole-Lowsley-Williams, the property passed to his son John (d.1958), who a few days before his death gave Chavenage to his nephew, the present owner, Mr. David Lowsley-Williams, as a wedding present.  During his long period of ownership, the house has been used as the location for many films and TV programmes, and the house has been restored and opened to the public on a regular basis.

Chavenage is located to the NW of Tetbury.  From Tetbury leave on the B4014 (signed Avening & Nailsworth) then follow Brown Sign to Chavenage. After approx., 1 ½ miles turn left onto unclassified road, after 1/n turn left a ‘T’ junction in to the Limne Tree Avenue, go on past the Coach entrance and the main entrance is on the RHS.  The House is also sined directly off the A46.