You are here: Things To Do > Live Escape Salisbury - Escape Rooms 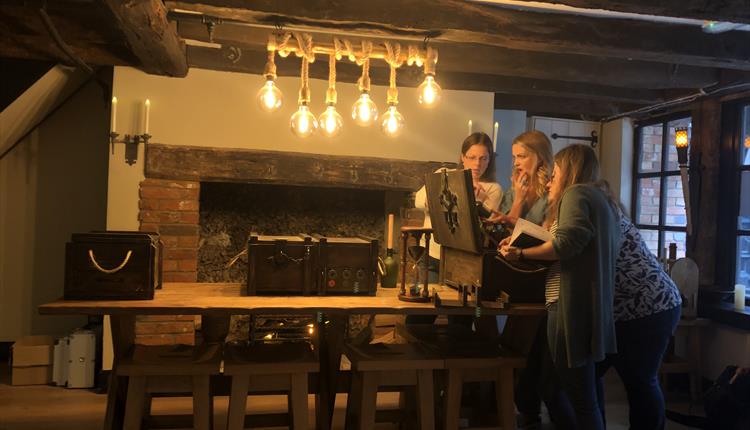 Here there are plenty of attractions for visitors to enjoy: 'Pieces of Eight' puzzle chests, escape room 'The Brig' and also paranormal investigations with Spire Spooks Paranormal every Friday and Saturday night.

Bring your friends, family and work colleagues to the Plume of Feather's Inn, the pirate tavern serving up immersive experiences along with a flagon or two of grog and wines.

Pieces of Eight
A play at the (Captain's) table game consisting of three treasure chests. Bursting with unique puzzles and cool pirate props, your team of up to six crew mates must steal Captain Batholomew's treasure before the hour is up. Buccaneers can also have the tavern wench serve them a flagon or two of grog.

The Brig
Shackled in chains in the gaol of a galleon ship in Salisbury Docks. Up to five crew members must find their keys, unchain themselves and work together to flee their floating prison before the king's men arrive to deliver them to the hangman's noose.

These two experiences can be played stand alone, or as a versus experience for up to 11 people.

Paranormal investigations
A new experience in an old haunt. This 14th century building has featured on TV's Ghost Towns in the past, and is synonymous with several spirits (of the ghostly kind).

Join the team at Spire Spooks Paranormal to investigate the ghostly goings on across all three floors after the escape rooms close on a Friday and Saturday night. The team has all the latest ghost hunting equipment, from REM pods, to Spirit Boxes. You're guaranteed an enlightening few hours.

Spectre escape room
On Castle Street, just five minutes from Salisbury market square, is Spectre the escape room. Your team of up to eight players must access the abandoned facility belonging to the Respect Foundation and uncover what happened to the missing scientists.

This escape experience was recently awarded the accolade of being in the Top 100 escape rooms in the UK by industry reviewers, enthusiasts, players and bloggers.

For more information on all of Live Escape Rooms Salisbury's experiences visit their website at live-escape.co.uk

* Opening times may vary due to coronavirus precautions. Please check on the website.

Live Escape Salisbury is situated on Castle Street, five minutes from the Market Place in the city. The postcode for the nearest car park at Long Stay Central is SP1 3SL.