You are here: Home > Things To Do > Caen Hill Locks 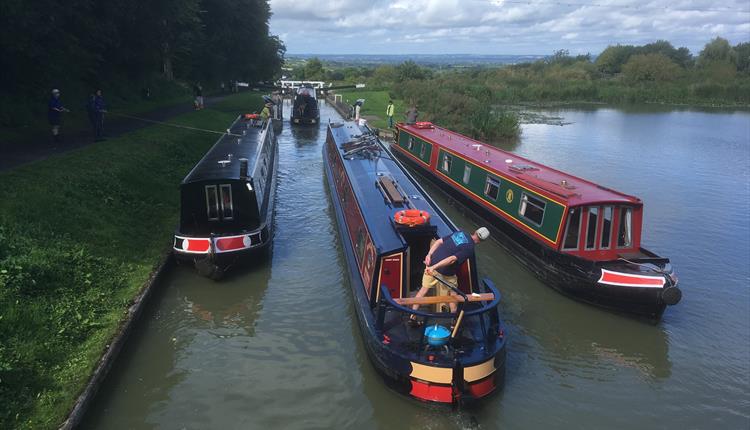 The Kennet &  Avon Canal runs all the way from the River Thames to the River Avon, connecting the town of Reading with the World Heritage Site of Bath and Bristol. It is 87-miles (140km) long and is made up of two lengths of navigable river linked by a 57-mile (92km) canal section. It passes through some of the loveliest scenery you could hope to see.

When you travel down the Kennet & Avon Canal you are hitting the rewind button on life. Wonderful views, tranquil waters, charming villages, quaint canal side pubs, impressive  locks- all of them looking much the same as they always did. Not forgetting Bath's Georgian architecture of golden stone and the rich maritime history of Bristol. Started in 1794, the canal was completed in 1810 to the designs of engineer John Rennie. It became an important trade route bustling with boats carrying a variety of goods. As it snaked its way across country the canal brought prosperity a and employment to rural towns and villages. Wharves and all the infrastructure necessary for handling goods were built, and today you can still see this fascinating industrial heritage scattered along the canal banks. The canal needed many locks and engineering  solutions to climb up and down the Wiltshire and Somerset hills. Engineers were innovators and designed remarkable canal architecture such as the Crofton Pumping Station, Claverton Water Mill and the Dundas and Avoncliffe Aqueducts.

The canal's locks are wide- big enough to take two narrowboats  side by side or a large beamed boat. Most spectacular of all is the famous Caen Hill Lock Flight in Devizes, considered one of the wonders of the waterways. In order that boats could climb or descend the steep hill, 29 locks were built between Town Bridge and the bottom lock at Lower Foxhangers. In the middle of this is the 'staircase'  of 16 locks with enormous  side pounds that hold water to fill the locks. If you're taking a boat through them it's best to give yourself ample time.

The canal was a busy thoroughfare  until the Great Western Railway Act of 1835 led to the building of the railway from London to Bristol. Faster and more efficient, the railway began to steal trade away from the canal which gradually declined.

By the mid-1950s  the canal was derelict and on the point of abandonment when a group of waterways enthusiasts decided to act. In 1962, they formed the Kennet and Avon Canal Trust, determined to rescue the canal and make it navigable once more. Working with the then British Waterways (now Canal & River Trust) and local authorities they plugged the leaks, fitted new lock gates, restored the towpaths and bridges and after a grant of £25 million from the Lottery Fund it finally reopened in 1990.

Today this ribbon of water provides pleasure  for thousands of tourist boaters, walkers and cyclists, as well as a home for 'liveaboards' -those who choose to live permanently  on their boats. Every Easter the Devizes to Westminster Canoe Race challenges  paddlers to race the 125 miles to London via the canal and the Thames. A broad array of businesses  make their money from the canal, ranging from hire boats, marinas and chandleries  to floating cafes and hairdressers.

It is also hugely important for all sorts of animals and plants. You will see swans, ducks and heron, and if you're lucky catch the flash of kingfishers. Water voles and otters are more secretive, but they are here. Curious cows come down to the banks to drink and watch you chug on by. The water teems with fish such as roach, pike, perch, bream, tench and small minnows. The aggressive  pike is the largest of all canal fish and often lurks among weed beds bursting out to catch smaller fish.

There are lots of plants to spot as you visit- the wide, leathery leaves of water lilies float on the surface, and you can see their attractive flowers from mid-May until the first frosts. In summer,  brightly-coloured purple loosestrife provides food for long-tongued insects such as brimstone butterflies  and elephant hawk moths and the towpath vegetation attracts many more species of insects. The rustle of common reed will provide a soundscape  to your walk and a summer home for reed and sedge warblers. The fact that by boat you cannot travel faster than 4mph, forces you to embrace that wonderful antidote to modern life-slow time. If you are on the towpath, take time to observe the changing seasons and give a friendly greeting to all who pass by. So please, when you visit us, slow down, linger a while, chill out- there is so much to enjoy about the spectacular Kennet & Avon Canal.

The Canal & River Trust cares for 2,000 miles of canals and rivers across England and Wales.  We are passionate believers in using the power of these waterways to transform places and enrich lives. We want to see every waterway used to its full potential, and every place changed for the better by the waterway that runs through it.

Through our work we are helping people live healthier, connected,  more sustainable,  and richer lives. Every year, around 15 million people visit our waterways, we inspire 38,000 children through our out-reach work,  and we enable over 6,000 volunteers to make a positive difference in their local community.

Our waterway network is a 200-year old national treasure. It makes people's lives better and we're here to make sure it can be loved, used and enjoyed forever.

With your support we can protect our waterways forever. Visit us at canalrivertrust.org.uk/friend and become a Friend today.

Cycling: National Cycle Network - Route 4 Reading to Bath. The route extends to Bristol along the Bristol & Bath Path and is a part of the Severn & Thames Cycle Route between Gloucester and Reading.