You are here: Home > Things To Do > Live Escape Salisbury - Escape Rooms 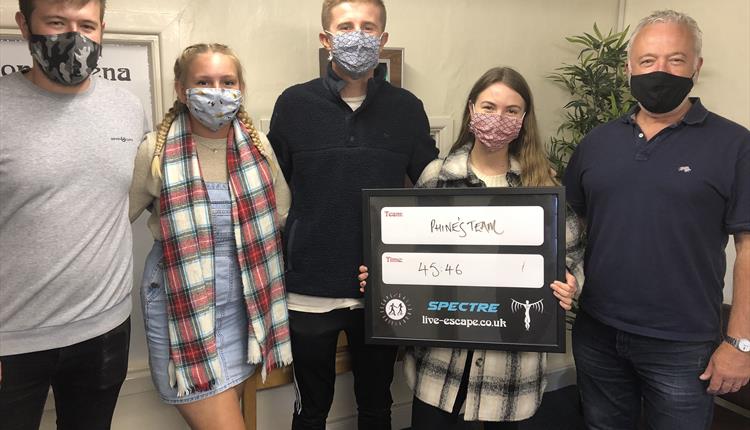 If you have never heard of an escape room here is a brief explanation: You choose your team from your friends, family or even work colleagues - a team usually consists of between two and eight players. At the escape room, the plot of the game is revealed and you and your team members get ‘locked in’ the escape room with the only means of escape being to look for hidden clues, solve puzzles and work together to ultimately unlock the door to the escape room within the time limit.

Live Escape Salisbury’s escape room experience, ‘Spectre’ is becoming well known for its immersive gameplay, intriguing storyline and unique, hand-built puzzles. With five star reviews, more and more visitors and Salisbury residents are beginning to realise that time spent together can be more than just a trip to the pub, perusing the shops or visiting museums. It can be fun, challenging and a great way to bring everyone together.

So what’s the story of ‘Spectre’? The Respect Foundation’s Station Athena facility has been deserted by the Respect scientists, but just recently there has been activity. People have been seen coming and going with files and equipment. Your team must investigate what has been happening at the station and what ‘s become of the scientists who have gone missing. Is something despicable going on? Who is playing games? The only way to find out is be part of the game yourself.

Now available from Live Escape Rooms Salisbury and Spire Spooks Paranormal: Become a paranormal investigator for the evening and explore our 14th century building after dark, when the escape rooms close.

In small groups, experts Barry King and Ian Crowley will guide you around the three floors, explaining how to use the latest ghost hunting equipment.

Are you brave enough? Hunts run on Friday, Saturday & Sunday nights from 9pm - 1am. The cost is £35pp. Private bookings are available 7 days a week.

* Opening times may vary due to coronavirus precautions. Please check on the website.

Live Escape Salisbury is situated on Castle Street, five minutes from the Market Place in the city. The postcode for the nearest car park at Long Stay Central is SP1 3SL.