You are here: Home > Things To Do > Silbury Hill 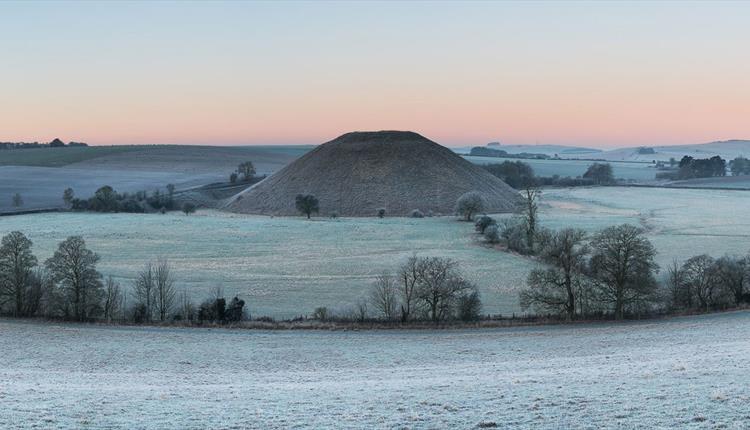 Silbury Hill is an extraordinary artificial prehistoric mound located near Avebury in Wiltshire. The huge man-made hill was constructed four and a half thousand years ago and is the largest prehistoric mound in Europe – similar in size to some of the Egyptian pyramids!

The imposing and enigmatic structure of Silbury Hill dominates the surrounding green Wiltshire countryside. It is located near the famous prehistoric stone circle at Avebury, and was constructed in roughly the same time period. Both are part of the same UNESCO World Heritage Site, along with the famous standing stones at Stonehenge and other nearby Neolithic sites. This area has an exceptional array of prehistoric monuments which have survived from the Neolithic period.

There is no public access to the hill, in order to protect this important archaeological site. However, you can walk around the base of the mound and admire the view of this mysterious monument standing tall above the pretty Wiltshire countryside.

Silbury Hill can be seen for miles around and incorporated into some lovely walks in the surrounding area.  You can take half an hour to follow a short loop all the way around the base of the hill. Or if you fancy something longer you can walk between a number of the local World Heritage Neolithic sites including the Avebury Stone Circle and West Kennett Long Barrow.

The History of Silbury Hill

Silbury Hill stands 130 feet (40 meters) tall, covering an area of more than five acres. It was originally constructed from chalk. Radio-Carbon dating suggests that it was built around 2400 BC and it is estimated that the mound would have taken hundreds of thousands of man-hours to construct. But much mystery surrounds the origin and purpose of this giant construction…

How and why was Silbury Hill made? What was it used for? How is Silbury connected to nearby Neolithic sites like Stonehenge, Avebury and West Kennet Long Barrow? What significance did the hill have for the prehistoric people who lived in Wiltshire thousands of years go? Many theories have been put forward, but the exact meaning and purpose of the hill remains unclear. It has been speculated that the hill was a burial mound, but no sign of burial remains have been discovered here. New archaeological discoveries continue to be uncovered, which may shed further light on some of these mysteries in the future…

Today, Silbury Hill is managed and looked after by English Heritage. It is part of Wiltshire’s Stonehenge & Avebury UNESCO World Heritage Site.

Due to the fragile state of the hill walking on it is not permitted.

5 miles west of Marlborough along the A4.