You are here: Home > Things To Do > St Michael's Church 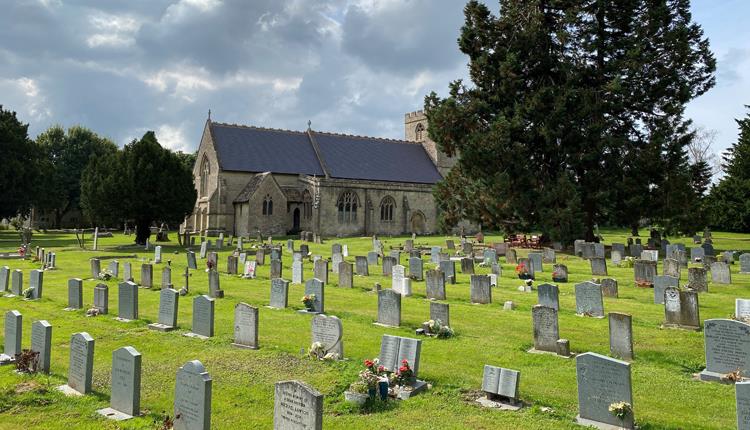 St Michael’s church is a Grade II listed building set in a large well-kept churchyard in the
village of Lyneham. The church had strong links with the former RAF base at Lyneham
and indeed, for nearly 40 years the RAF chaplain was also the parish priest.
Within the church there are strong reminders of the relationship with the RAF. The Altar in
the chapel is modern and has, on the front, badges of RAF Squadrons associated with
RAF Lyneham. In front of this altar is another smaller, wooden, portable altar which was
built and presented by the American ‘CeeBees’ in Iraq, to 47 Squadron after the shooting
down of Hercules XV 179 in 2005. It was subsequently brought back from Iraq and
presented to St Michael’s. It is currently used for Holy Communion at midweek services.
At the west end there are 8 RAF standards suspended from the walls that have been laid
to rest.

Two modern features, and indicative of the relationship with the RAF is the RAF Lyneham
50th anniversary window on the south wall and the 47 Squadron window on the north wall.
The RAF Lyneham window was designed by Henry Haig, with calligraphy by Joan Haig. It
is a unique and complex window which is designed to lift the eye from the busyness of life
on the station to things spiritual. The window was dedicated by Her Majesty the Queen in
1990. Below the window is an oak desk made by Illingworth and Partridge and contains a
Book of Donors containing the names of those who made the project possible.
The 47 Squadron window was installed by Salisbury Cathedral Stained Glass and was
inspired from the Squadron badge and motto “Nili nomen roboris omen” meaning “The
Nile is an omen of our strength” and the Biblical Water of Life motif.

There is evidence of a church on the site dating from the 1100’s but parts of the current
building are 14th and 15th century structures. The chancel, nave roof and much of the
nave were completely rebuilt in1863.

The Font has no specific date but it is undoubtedly medieval. On the north aisle wall is the
Walker Heneage monument dated 1731. It is described by Professor Pevsner as a ”surprisingly grand and pure piece. A standing wall monument of white and grey streaked marble and an open segmented pediment with two desperate putti on it”. The north aisle chapel has a rare housing bench, used as a communion rail in the old form of a bench.

From a church inventory circa 1900 it appears it was once used to rest coffins on.
The Chancel was in such a poor state of repair that it was completely redesigned and built
by the Victorian architect William Butterfield in 1863. It is typical of his designs with much
use of mosaic and tiling insets. This may not be to everyone’s taste and in 1954 much of it
was removed or covered over. Since then, some of the tiling has been uncovered but some
still remain concealed with colour wash. The East window is filled with a late Victorian
stained glass by Gibbs depicting the resurrection of Our Lord and a further memorial to the
Heneage family. The two manual organ by Sweetland was installed in 1909 with the help of
public subscription along with a donation of £110 given by Mr Andrew Carnegie (of
Carnegie hall fame).

St Michael’s has a large churchyard with a number of protected trees. Of note is the large
Yew Tree outside the church main entrance which is believed to be as old as the original
church.

On the northern edge of the churchyard is a plot of some forty military graves which are
tended and cared for by the Commonwealth War Graves Commission. Beside the graves
is the LXX Bench dedicated to the crew of XV193 which crashed in Scotland in 1993.