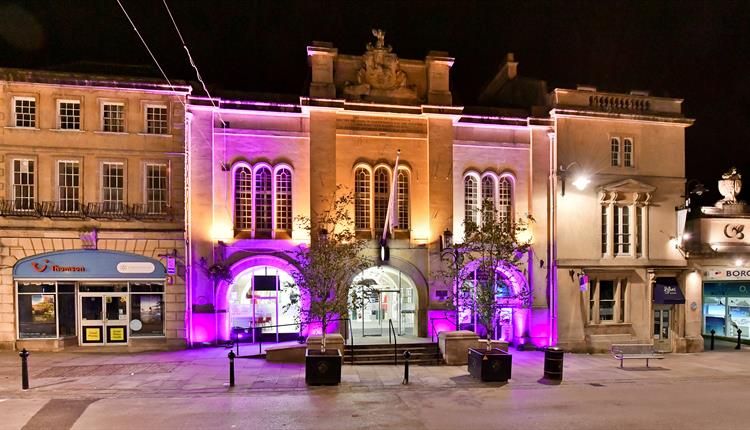 The historical market town of Chippenham is one of the West Country’s most vibrant towns.

Nestled on the banks of the River Avon and a little over an hour’s journey from central London, Chippenham offers an ideal centre for relaxation and exploration of rural Wiltshire, Bath and the Cotswolds. Chippenham is 4 miles south of the M4 and on the mainline rail route from London Paddington to the West Country and just 10 minutes by train to Bath.

Chippenham enjoys a reputation as a flourishing and lively market town, with a compact centre and thriving commercial life, it has been granted Purple Flag Status for its nightlife. The main shopping areas are on and adjacent to the High Street, Market Place and The Causeway and The Bridge, New Road and Hathaway retail Park. The enclosed Emery Gate Shopping Centre and open air Borough Parade Shopping Centre lie on either side of the High Street. There are a number of out of town shopping areas including Hathaway Retail Park, and Methuen Park.

The Wiltshire & Swindon History Centre and the accredited Chippenham Museum are located in the town.

Chippenham’s colourful and booming street markets are held on Fridays and Saturdays in the High Street and offer a variety of traditional and modern stalls.

Chippenham has a wealth of beautifully maintained parks, play areas and open spaces notably John Coles Park with its mature trees, flower beds and Victorian Bandstand and Monkton Park which sits on the banks of the River Avon.

Archaeological finds indicate a Saxon date in the 7th Century for the first urban settlers of Chippenham. In 853 Ethelwitha, sister of King Alfred was married in Chippenham. The medieval timber framed Yelde Hall is situated in the Market Place and dates from between 1446 – 1458. In 1747 Chippenham was at the centre of a parliamentary scandal involving bribery and corruption of the two members for Chippenham, which led to an election petition that brought down the government led by Sir Robert Walpole. A canal spur of the Wilts and Berks Canal in 1798 advanced trade in the town, further aided by construction of the Great Western Railway from London to Bristol which reached the town in 1841.

Surrounding Chippenham are a number of stone-built villages and the film makers’ favourites of Lacock (National Trust), Biddestone and Castle Combe that have featured in such film and TV dramas such as; Harry Potter, Cranford, Pride & Prejudice, The Christmas Candle, The Wolfman, War Horse, Stardust, Larkrise to Candleford, Dr Dolittle and Poirot.

The great houses and art treasures of Longleat, Bowood, Corsham Court, Lacock Abbey and Dyrham Park are within easy reach, as is Castle Combe Racing Circuit.

The combination of the ancient and the new, the historic architechtural gems, excellent communication links, beautifully maintained parks, modern shopping centres and with some of the country’s greatest houses and historic villages on the doorstep, makes Chippenham and idyllic location for living, working and visiting.