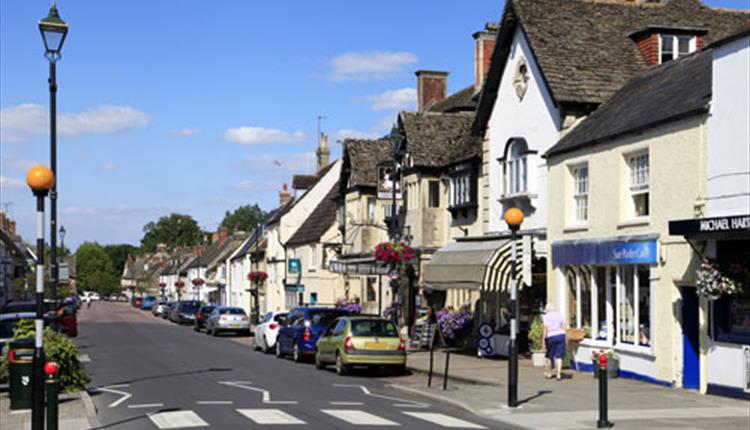 **Find Space, Stay Safe. If you are visiting any of Wiltshire's towns or villages, or our timeless countryside, please read our guidelines on visiting Wiltshire safely and responsibly before you travel.**

Situated in the north of Wiltshire, Cricklade is the First Town on the Thames and the Southern Gateway to the Cotswolds. The Thames Path National trail passes through the town, which is an excellent base for walkers and visitors to the Cotswold area and Cotswold Water Park which boasts 140 lakes for recreation and leisure.

The town is steeped in history, with one of the first claims to fame as the home of a royal mint from 979 to 1100, there are some examples of Cricklade coins in the town museum and mention of the town in The Domesday Book.  It is one of just a few preserved Saxon Towns.  The quintessentially English High Street has a range of businesses, cafes, pubs and hotels. Cricklade was awarded the top RHS prize, Champion of Champions, in the UK finals of Britain in Bloom in 2011.

On the outskirts of the town you will find North Meadow National Nature Reserve. This Site of Special Scientific Interest (SSSI) is home to the UK's largest population of wild Snakeshead Fritillaries. Check here for the latest details on when to see the flowers at their best and how to protect the meadow during your visit.

Nearby is the Blakehill Nature Reserve, which offers 600 acres of grassland, owned and managed by Wiltshire Wildlife. Dance Common is on the outskirts of the town, it is 2.32 hectares and a Wiltshire Nature Site, it is managed by a team of local volunteers.

Within a few miles of the town there is also the Swindon and Cricklade Railway, a heritage standard gauge railway and depot operated by a group of local volunteers.

Cricklade is an excellent base for those interested in history, wildlife enthusiasts, walkers and in close proximity to many recreational activities for all age groups.