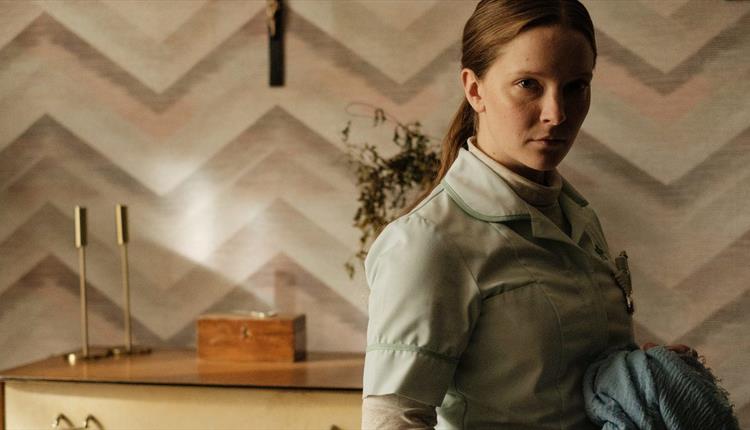 A bold and strikingly original psychological chiller, Saint Maud follows a young live-in nurse whose lonely life and religious fervour lead her towards an increasingly dangerous quest that is anything but holy. Heralding the arrival of a bold new voice in British cinema, first time feature director Rose Glass, and a breakout lead performance from Morfydd Clark, Saint Maud is a deeply unnerving must-see for film-lovers and adventurous horror fans alike.

Live-in nurse Maud (Morfydd Clark) arrives at the home of Amanda (Jennifer Ehle), a famous dancer now frail from illness and trapped in her grand, isolated house. At first Amanda is intrigued by this religious young woman, who provides distraction from her failing health. Maud, in turn, is bewitched by her new patient. But Maud is not all that she seems. She is tormented by a violent secret from her past and by ecstatic messages she believes are directly from God. She becomes convinced she has been sent to Amanda not simply as a nurse, but to serve a divine purpose. As her grip on reality slides out of control, Maud's care turns into a deadly mission to save Amanda's soul, by any means necessary.

★★★★★ "Maud, the newly God-fearing subject of Rose Glass's electrifying debut feature, which establishes the writer-director as a thrilling new talent in British cinema". Mark Kermode's film of the week, The Guardian